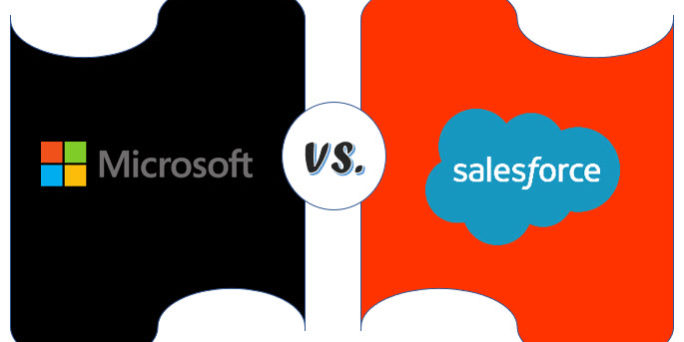 Within the Association landscape there are multiple AMS (association management software) solutions. That scope narrows significantly when looking at progressive software models that promote the idea of digital transformation. The two most robust and popular Business Platforms used by associations then comes down to Microsoft Dynamics and Salesforce, but which one is the best?

Since 2014, Microsoft has focused on its SaaS business, and business is great. They have grown from a $380B (market cap) to a greater than $800B company in just four years. Most of that growth is attributable to their Business Platform. Some of the more popular components of the platform include:

Microsoft makes many acquisitions each year, and over ¾ of them directly benefit the Dynamics business platform.

Like Microsoft, Salesforce has also grown and is doing a fantastic job. It’s gone from a $60B (market cap) to a $155B company in just 4 years. They, too, have also acquired a few companies. Some of Salesforce’s notable acquisitions include:

Platform Summary: Microsoft’s platform is the fastest growing, has the greatest number of business apps and connectors, and is the largest platform available to organizations.  Microsoft is accelerating debt free at a tremendous rate making it very difficult for other platforms to keep pace. Due to its rapid growth – platform connections, integrations, and offerings are always being updated and added. It is also the most affordable, has frequent price drops, and performance increases.

Both Salesforce and Microsoft offer varying SaaS pricing models. While it is difficult to compare them exactly the same way, Microsoft is typically 2/3 the overall cost of ownership when looking at equivalent features. The key is to look deeper into initial set up costs, licensing, transactions costs, API costs, feature costs and ROI over the long term. Unlike Salesforce, “Upsell” and “Go Live” cost increases are not part of Microsoft’s plan. Microsoft is generous with licensing and does not halt you like others do if you dip into an unlicensed feature.

Reflected in Dynamics’ price is its robust out of the box functionality and inherit Microsoft integration. When associations are quoted implementation costs of a Dynamics based platform, the costs may initially come in higher than Salesforce. The key is to look deeper at the long-term costs. The cost to add apps is significantly reduced with a Dynamics implementation because so many apps are already included. Salesforce does not have the same number of included apps with its application. While the extensibility of the platform is comparable to Microsoft’s, the cost of implementing the extended functionality will most likely be much higher.

Salesforce offers basic services out of the box, and they have a sizable AppExchange that allows users to easily extend their platform. The apps there are all designed to integrate with the Salesforce platform. What you may not know is that the AppExchange typically adds 25% to the cost of the app. Also, you cannot bypass Salesforce’s AppExchange to purchase your necessary apps from another venue.

Microsoft has 3 “App Stores” (CRM, Azure, Office) with some overlap and thousands of apps. Unlike Salesforce, there are many hundreds of other app stores that allow you to add apps without paying that commission.  In fact, many of the apps in Microsoft’s app stores are free and open source.

To help give you a better understanding of the platforms’ price differences, we have developed the following comparison chart:

When viewing a demo in either platform you need to be sure the demo you see is the product you will ultimately get. For example, if the demo is showing you the Lighting Enterprise license but your users are getting a Force.com license that is like test driving a Mercedes S Class and then learning the car you bought was a Toyota Celica.

Shameless plug: Altai demos using the team license, and when demoing to the sales team at your organization, we demo using the Customer engagement.

Platform Cost Summary:  Microsoft is considered by experts to be approximately 2/3 the overall cost of ownership versus Salesforce. That said it is recommended you do your research when considering licensing for each product.  Beware of licenses that will need to be upgraded on “Go Live” day. When that day comes, it will be too late to shop and negotiate pricing.

Microsoft vs. Salesforce by the Numbers

To understand what each company is doing in terms of investments, hiring, and giving, review the chart below:

Platform Summary:  While Salesforce has grown significantly over the last five years, they can’t touch Microsoft in terms of resources. The financial and technical investments Microsoft makes in their own products and services is over 90% higher than Salesforce.

The Microsoft Business Platform is designed to seamlessly work together with all the Microsoft tools you already know and use: Excel, PowerPoint, SharePoint, Skype, Teams, Word, Outlook, etc. While Salesforce does integrate with some of those same Office apps, they are each separate integrations that need to be individually synced. Unlike Salesforce, when linked together, Dynamics 365 turns Outlook into a one-stop-shop for managing member information, scheduling, and email messaging. So much of Dynamics functionality can be completely accessed within Outlook, making it so your core activities can be completed without ever leaving Outlook at all.

Platform Integration Summary:  As the original SaaS platform, Salesforce goes to great lengths to ensure that the apps in AppExchange fully integrate with their core platform. But it can’t touch the seamlessness of Dynamics’ integration with all the apps that come with Microsoft Office. If you are currently using, or thinking of using, Office 365, Dynamics is an app that is included on the Office 365 dashboard. To use it, you simply purchase the required licenses.

Salesforce does a great job of marketing the fact that they were the first to introduce SaaS automation into the marketplace, but the velocity at which Microsoft is investing and growing their business platform is astonishing. If you are looking for a true association business platform, the numbers don’t lie, Microsoft has many more features and is more affordable. Let us give you a preview and, we think you will be very pleasantly shocked.

Contact us at sales@altaisystems.com to learn more about how the power of the Microsoft Business platform that powers Altai Systems can digitally transform your organization.

Why Associations Should Choose a CRM
September 7, 2021
Go to Top